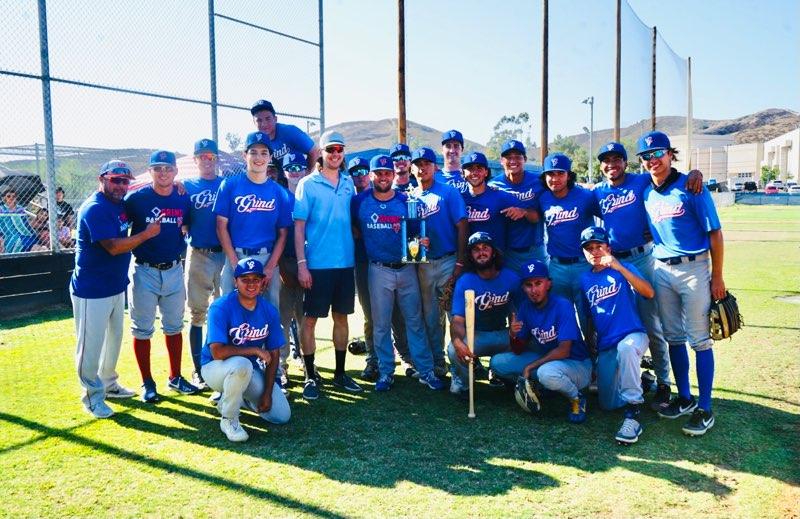 Saturday afternoon the San Diego Force forced a deciding game three to see who would take home the 2021 PSL 1st place trophy. The Force got out to a hot start game three, scoring six runs in the first three innings. Three in the first inning thanks to a 2 RBI double by Gabe Jones and an RBI single by Taylor Meaux. They scored another three runs in the third inning off of a 2 run homerun by Caleb Harmond and an RBI single by Alec Arnone. The bats cooled down for the Force after that. The Grind slowly made their way back into the game. They scored one in the fourth inning (RBI single by Andres Contreras), two in the sixth (RBI double by Jake Borst and an E4), and one in the seventh (RBI single by Micah Wiggs). The Force answered with one of their own in the bottom of the seventh off of a wild pitch by Robert Carrillo. Going into the ninth inning the Grind were down 7 to 4. The Grind definitely lived up to their name this game. Conner Bell had a RBI single to score Victor Arreola. Then they grinded to get bases loaded for Zak Farris to hit a 3 RBI single to centerfield. Grind pitcher Rocco Gurrola was able to close the door in the bottom of the ninth. The Grind take the championship series with a final score of Grind 8, Force 7. Zak Farris would win MVP for the champ series. Congratulations to both teams for an awesome season!